Where did the three months go?

It's November 29th. This is remarkable because I suddenly realize I will be going home in two weeks.
The rice has grown from green shoots reaching to my knees to drooping golden heads that brush my shoulders. Everywhere both men and women are stooped in the fields, harvesting. In a way, this is my best way of marking time's passage in a land where I'm unfamiliar with the seasons. There are other clues: the rains have stopped, mercifully taking the leeches with them. The river has dropped, revealing more carvings of gods in the black rock. Areca nuts are being laid out to dry. How much I would give for a whole year here—to see the seasons go around, to have a hand in the very cyclic agriculture of the Malnad. “I wish you are here in January, Sarah,” Manoramakka says to me. “That is when we plant vegetables in the paddy-field, and all my friends come, and we...we just laugh all the time.”

I'm searching for the answers to two questions. The first is, should I leap into international agroecology, into an attempt to insure that those agricultural cultures that are still holding on keep the threads of knowledge, community, and land woven together? Or should I go home and work to preserve the integrity of the place that raised me to love the land as I do, to re-weave some of those frayed threads?

The second is, if I am taking the international agroecology road, do people want to be farmers? Or do people want it all done by machine? Will there always be children who grow up like me, who find that land-work is laid in the foundations of their souls, who are happiest when up to their elbows in compost or racing the dusk to get seeds planted? I have found people like this here. But not young people. India is intent on getting its youth into six-day school weeks and then into high-paying IT jobs. And I can't say I blame those who do go that route—you can do so much more with money than you can without it. So this, too, will have to change, the fact that farmers are poor by profession.

Does anyone else find it strange that we pay the people whose jobs are most necessary—the people who grow our food, make the bricks and planks that build our houses, cook our food, care for our children, etc.--the least, while we pay those people who do the least necessary work the most? If CEOs and executives and pro sports players quit working, would there be any real impact? Whereas if farmers went on strike...
Anyway, enough musing.

I went to Ankola to see Rama Nayak's work in two schools and help her with various tasks. Rama is an amazing person with an amazing story. I could write so much about her, but that is her story to tell. Basically she teaches in an English medium school and does school garden work in a village school. She is one of those rare teachers whom the students seem to respect for her conviction, knowledge and integrity alone; she is not flashy or young and even encourages unpopular things, such as the giving up of fireworks. Yet still the students, even boys, flock to her natural history club, even coming to school early for birdwatching.  Gesturing wildly, one girl told Rama a story in rapid Kannada. Apparently a poisonous snake had got in her bed, and because of what Rama has taught them about not killing animals, she and her father removed the snake in a pair of trousers. The father said he would kill the snake if it was still there in some more time, and this girl and her sister prayed for the snake to leave. It did. (I later learned that she and her friends were Girl Guides! This was actually not all that surprising, but so great! that they have that!)

This girl promptly approached me as soon as we headed for the bus. “Akka, I am very happy to see you,” she said. I told her I was impressed with her snake skills. “That is because of Akka,” she said. “Because of her, I have guts. I did not have guts before. And also now because of you I have a little more guts.”

Seeing as I just met her, I think she said that to be nice. But I certainly have more guts because of this girl, not only for her snake skills but for, as a thirteen-year-old, just coming up to a stranger from another country and striking up a conversation.

And I'm sorry to keep bring up this gender thing, but here it matters SO MUCH. From the boys in this class, though they study in English and can speak it, the only attempt at conversation I got was “Which game you like?”

Nicholas D. Kristof, in this book Half the Sky, said something to the effect that if one sex is taught from birth that they are better merely because of what's between their legs, they will not try as hard, they will become lazy in their assumed superiority. This imbalance of power is not good for them—where is the incentive to strive for anything at all, if what determines your status is just there when you're born? Needless to say, it is also not good for those who are put down, hassled, whistled and leered at, legally disempowered, beat up by drunk husbands, forbidden to be what they want when they grow up by fathers, and abandoned as babies because of what's between their legs. Yet despite all of that, these girls try so hard and are so smart. Though creativity is not emphasized at all in the Indian-modeled-after-British education system, because these girls have to struggle against such odds, they must exercise creativity. It literally shines out of them.

Kristof's point is that equality is good for everyone. Of course I agree on principle, but now even more so. When I go in a classroom, the thing that makes me saddest (and mad, too) is seeing all the boys slouched in a clump, looking out from under their eyebrows, trying to look cool or something. Because they have nothing else to try for. The guys on TV are just slouching around looking cool and being jerks, and the men in town are just chewing betel leaves and smoking little cigarettes (or they are hardworking farmers and kind, but poor) while the girls have these role models, teachers like Rama, doing real, snake-chasing, bad-ass work.

OK OK, and maybe girls just are intrinsically more inclined to communication and sitting still in school and all of that. I also think when education changes to be more hands-on and participatory, boys will be much better off in school. But still, no matter how good your education, if you're taught from birth that someone else will wash your clothes and do your dishes and make your food in addition to their fair share of agricultural or other paid work—in other words, if someone else is expected to do half your work in addition to their own—where's your incentive to try at all? Where is your incentive to be a better person if you are already better than half your community in that community's eyes, no matter how much of a jerk you are?

So you men and boys whom I love—give these boys something else to look up to, will you please? I can praise them to the skies for kindness, for knowledge of nature, for a good eye for birds--I can't show them how to be men in a way that is kind, strong and wise. But you can. 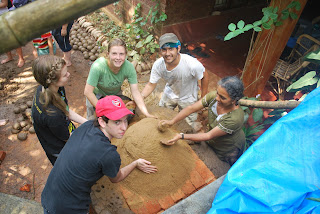 Building a Cob oven at Sunita's with students from the Mahindra United World College of India. Here we're making a form of sand to put the mud around. 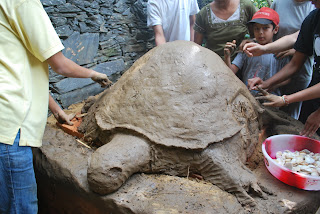 It's a Turtle! I'll post a finished picture when I get around to it. The students had a lot of fun doing this, I think. I did too! 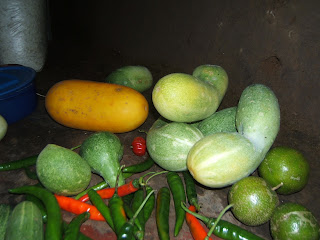 A selection of Malnad homegrown vegetables 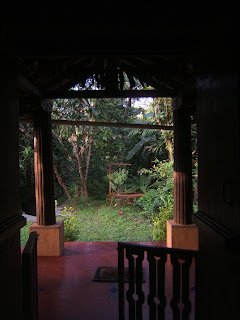 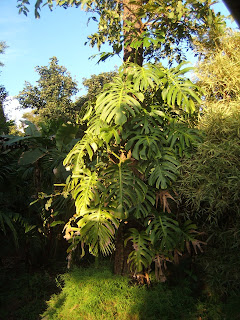 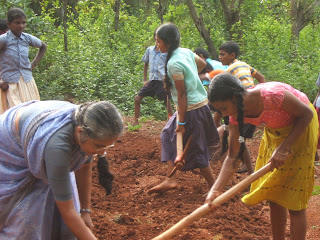 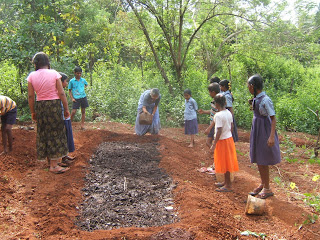 Gobra, or compost--someone's dad brought a huge load in a bucket on his head. The school garden has been incredibly well received by the community, but then Rama has great cred here: she has been working with this school for about 20 years. Her husband started a very democratically-run cashew resin factory in Gundbala after having gone to this very village school, risen academically and gotten a PhD in the US. Then he came back home. So there are also this kind of men in India. And the policeman who told Sunita he would be truthful, and my friend Poppy's dad, and Manjunath. But they are not the loud ones. 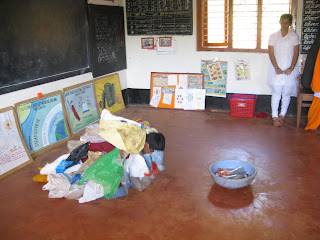 Rama has written "street plays," an old tradition, with an environmental message. This one, about the dangers of plastics and the alternatives, was highly entertaing. Here, this Plastic Rakshasa (demon) kills wildlife, cattle and tourists alike...and then laughs manaically. The students performed very well. 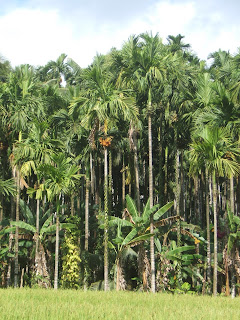 Areca orchard. Look at the canopy structure! From the top, areca trees, coconut palms, banana trees, and then vanilla climbing the areca trees as well as cardamom, ginger and other spices growing low to the ground. 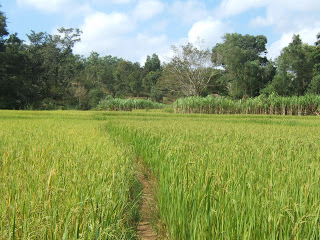 The rice paddy which I cross to get to the bus. To the right, sugarcane. I like pictures of paths and roads. 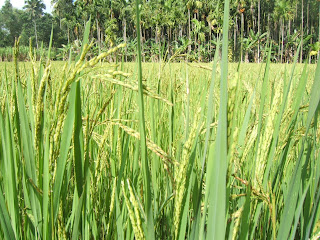 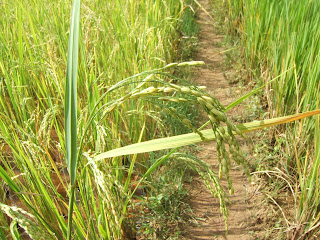 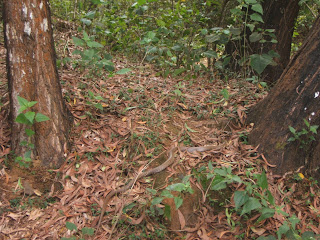 Can you spot the snake? 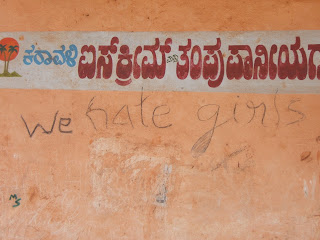 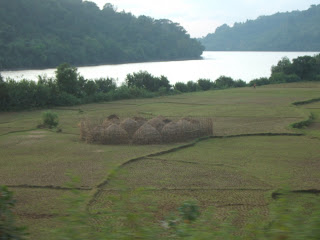 Rice, stacked to dry, along the estuary where the Gangavalli River meets the Arabian Sea. These "huts" of rice prevent some water from entering...but the rains have been so long and irregular in Ankola this year that much of the crop has been lost. This is who bears the cost of climate change. 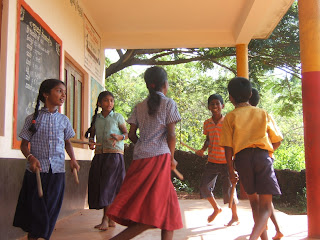 Village school kids performing a traditional dance. It looked like so much fun! I wanted to learn! 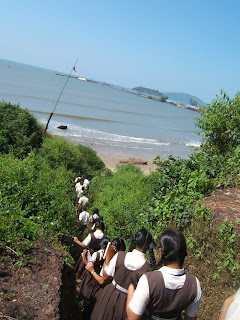 English medium school students going to do Beach Monitoring: seeing what species live on rocks, with quadrants and everything. Science practice! 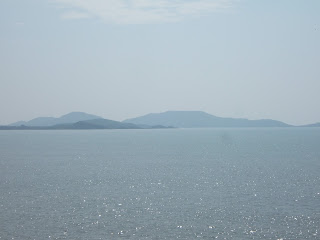 The Western Ghats over the Arabian Sea School as it ought to be! 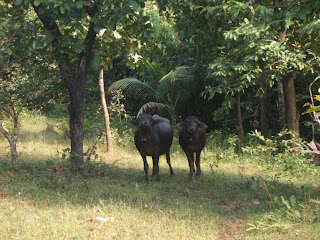